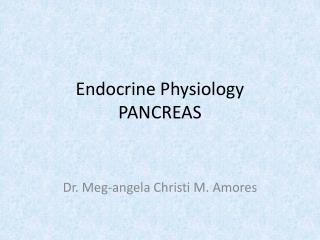 Endocrine System - . control of our bodies homeostasis. engage. you will be viewing some video clips from sideshow: alive

PANCREATIC HORMONES - . objectives. to know the functional anatomy of pancreas to be able to differentiate b/w exocrine

Endocrine Physiology The Endocrine Pancreas - . dr. khalid al-regaiey. pancreas. a triangular gland, which has both

Pancreas (including Pancreatic Islets) By Shehryar Ahmed - . location. the pancreas sits across the back of the abdomen

Pancreas - . brendan schmidt and alex barnett. location. the pancreas is about 6 inches long and sits across the back of

ENDOCRINE NURSING - . pn 142. objectives. be able to define key terms relating to the system be able to identify the