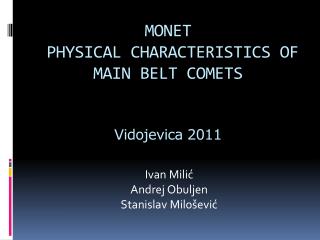 Lean Six Sigma Green Belt Training - . a. workshop goals. this workshop will help you learn to: implement a systematic

The Origin of Comets - . summary. past explanations for how comets began have serious problems. after a review of some

Oort Cloud, Kuiper Belt, Comets, and Asteroids - . origin of the kuiper belt kbo’s up close (sort of) the pluto

13. Remnants of Rock and Ice: Asteroids, Comets, and Pluto - . as we look out into the universe and identify the many