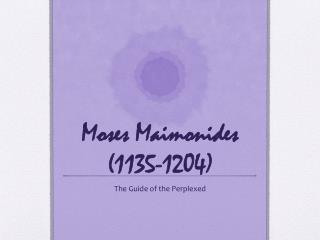 Moses Maimonides (1135-1204). The Guide of the Perplexed. Introduction. What are the Aristotelian four causes? 1) Efficient cause 2) Formal cause 3) Material cause 4) Final cause. Aristotle. Explain some of the basic concepts of Aristotelian Metaphysics. Substance Essence Accidents.

Middle East Society and Culture - . where continents meet. the middle east is not a geographical region, like africa,

THE SYNAGOGUE - . shul or temple. whatâ€™s in a name?. hebrew name = beit kâ€™nesset (house of assembly)

Judaism - . history of judaism. judaism is the oldest monotheistic religion. monotheism means the belief in one god.

All about Judaism - . everything you ever wanted to know and more!. where did judaism begin?. it began about 4,000 years

Moses Maimonides (1138-1204) - . known in hebrew as moshe ben maimon or the rambam (an acronym) regarded as the greatest

ISLAM The True Message Of Moses, Jesus and Muhammad (Peace Be Upon Them) - . nabil abdus-salam haroun. contents. chapter