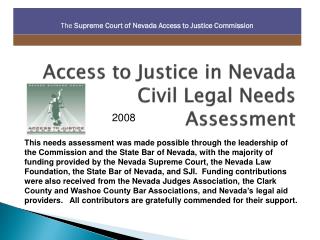 Right to Legal Aid &amp; Access to Justice - . the state of undertrials in alwar prison of rajasthan. 1.

Fair Access to Justice Legal Aid in the UK - . zhang tingting february 2013. contents. i what is legal ai d. your text

Access to Counsel = Access to Justice: Discussing the Right to Counsel in Civil Cases - . by john pollock coordinator,

SOCIAL JUSTICE AND ACCESS TO JUSTICE - . objectives law programmes ought to “expose students to the impact that the

Women’s access to justice - . progressive laws and functioning justice systems are the foundation for gender equality

Women’s access to justice - . progressive laws and functioning justice systems are the foundation for gender equality

Access to Justice: Remedies - . article 9.4 of the aarhus convention and the requirement for adequate and effective