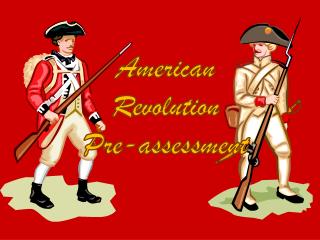 American Revolution Pre-assessment. 1. Who was the tyrant referenced in the Declaration of Independence? a. Queen Elizabeth b. King George c. Benjamin Franklin d. Thomas Paine.

The Revised Form of Government - . an introduction. in this presentation …. four key theological ideas contents of the

The Birth of America - . what factors helped to create a english empire in america?. puritan new e ngland. the pilgrims

My American Dream - Tosh knight. my american dream. future career. for my future career i would like to have a job

The American Revolution - . an introduction to america’s beginging. schedule of presentation. the patriotic revolution