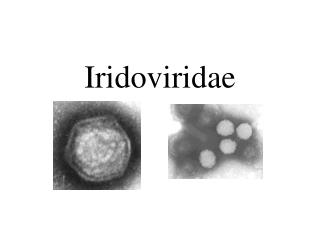 Iridoviridae. “Iridoviridae” derived from Greek/Roman goddess of the rainbow “Iris”. This is due to the iridescence that can be observed in heavily infected insects. Iridoviridae. First found in 1954 in the larvae of a crane fly. Most likely found world wide. Viral Genome and Structure.