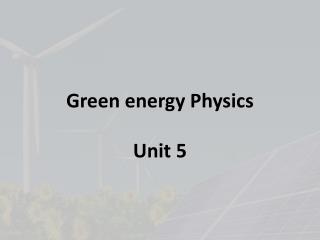 Green energy Physics. Unit 5. Classification. Renewable/ non conventional Non renewable/ conventional. How much solar energy?. The surface receives about 47% of the total solar energy that reaches the Earth. Only this amount is usable. Direct Conversion into Electricity. Green Energy - . mission. our mission is to develop and produce clean energy from the sources we deem most ethically and

Physics Energy - . law of conservation of energy. energy cannot be created or destroyed only transferred from one form

Stutton Green Energy - . public meeting monday 24 october 2011. agenda. welcome who are we? what do we propose? why are

Green Energy Nayland - . public meeting – february 17 th 2011. agenda. why are we doing this? what is green energy

High Energy Physics - . at the university of oregon. accelerator-based non-accelerator theory. standard model. what is