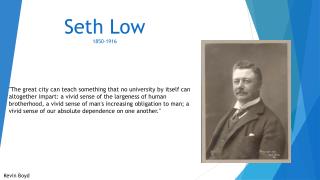 Seth Low 1850-1916. "The great city can teach something that no university by itself can altogether impart: a vivid sense of the largeness of human brotherhood, a vivid sense of man's increasing obligation to man; a vivid sense of our absolute dependence on one another.". Kevin Boyd. Early Life. THE FROG AND THE NIGHTINGALE by Vikram Seth - . presentation by kiran tiwari tgt english. the poet. vikram seth was born

SECNAVINST 1850.4 F - . major changes prompting the revision: enclosure 10 (what you need to know about the physical