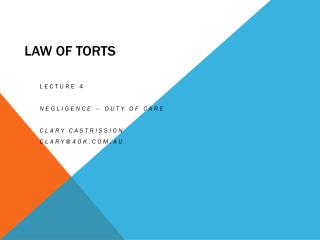 Torts: A Civil Wrong - . the idea of liability. under criminal law, wrongs committed are called crimes. under civil law,

Chapter 5: Torts - . §1: basis of tort law. doing business today involves risks, both legal and financial. a tort is a

Chapter 4 Torts and Cyber Torts - . learning objectives. what is the purpose of tort law? what types of damages are

THE LAW OF TORTS WEEK 3 - . trespass to property action on the case for intentional harm defences to intentional torts.

Torts - . chapter 4. negligence. an unintentional tort involves inattention or carelessness a failure to use due care the