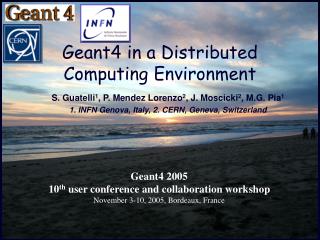 Geant4 in a Distributed Computing Environment

Geant4 in a Distributed Computing Environment

Accelerator Physics for Diagnostics - . helmut wiedemann stanford university. in this lecture, we focus on beam

Concluding remarks - . the physics case is strong and it has large complementarity to other astroparticle detectors the

USING INFORMATION VISUALIZATION (IN LIBRARIES): why, when, and how - . lida, zadar, 16th june 2014. workshop leaders.