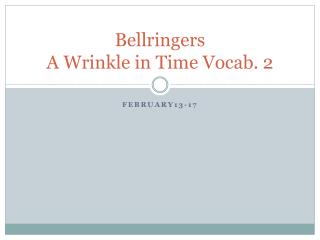 Bellringers A Wrinkle in Time Vocab. 2 Bellringers A Wrinkle in Time Vocab. 2. February13-17. Monday, February 13. 1. aloft -adverb–up high, upward 2. apprehension- noun– fear of what may be coming 3. curtsy- verb or noun – bow down as a show of respect 4. extinguish- verb – to put out; destroy

Bellringers A Wrinkle in Time Vocab. 2

Tools for Teaching Jeopardy - . click once to begin. by: fred jones presented by: mr. mitchell. exploration/early

Communicating through Generational Differences - . ids conference 2013 kerry anne keegan. be the change you wish to see

Point of View pictures and Sumerian Vocab - . vocab for sumer. fertile crescent – area of land in asia that is shaped

4. Time Study - . the major objective of this chapter is to learn how to calculate a time standard based on stopwatch

Vocabulary aspects of reading... with special attention to what the teacher can do - . part 1: you need vocab in order to

TIME MANAGEMENT - . time : its attributes. time is neutral time cannot be saved for future use each activity requires a