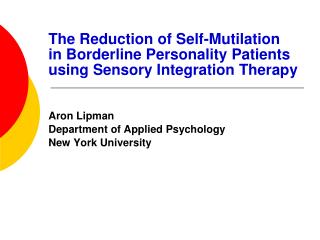 Self Mutilation - . by karen fackrell. fact:. approximately 1% of the us population uses physical self injury as a way of

The Effectiveness of Sensory Integration Therapy on Neuro ...

Borderline Personality Disorder - . brenda ortiz period 1 april 14, 2012. what is bpd?. bpd is a personality disorder. it

Borderline Personality Disorder - . mallory and sonia. test. 1. when your close friend unexpectedly calls off a meeting