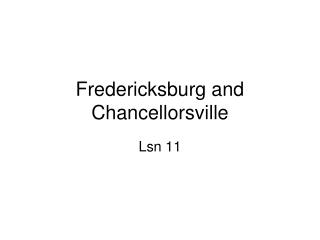 Fredericksburg and Chancellorsville. Lsn 11. Lincoln’s Command Problems. After Antietam, McClellan kept the army in western Maryland until Oct 1862 Lincoln could not find a general that would aggressively fight the war He’d already been through McDowell, McClellan, Pope, and McClellan again Battles of Fredericksburg and Chancellorsville - . the union tried to divide the confederate army at fredericksburg, but

CHANCELLORSVILLE - Fought from may 1 st – may 3 rd , 1863 it was fought in the vicinity of spotsylvania, virginia, near

Chancellorsville - . may 1-4, 1863. objectives. students will learn how the north reacted to their defeat at

Save Chancellorsville - . http://www.usa-civil-war.com/. why is this place so important?. a major civil war battle was

Fredericksburg - . december 1862. objectives. learn how the union once again tried a campaign to capture richmond. learn

The battle of Chancellorsville - . by: mills sullivan. where and when did the battle take place?. started on april 30 th

Fredericksburg Texas Winery - Texas has one of the most acclaimed wineries in united states. the high-quality grapes of

Plumber in Fredericksburg - From sewer line to water line repair, the pipe doctor plumbing& drain has expertise in