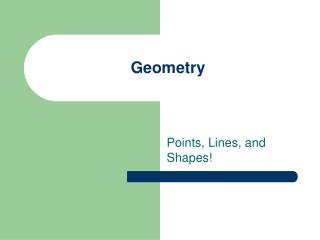 Geometry. Points, Lines, and Shapes!. Plane. plane A flat surface that stretches into infinity. . Point. point A location in a plane or in space, having no dimensions. . Line Segment. line segment Two points on a line, and all the points between those two points. . Line.

Geometry EOC Item Specifications - . the geometry eoc is computer-based. sample item 1. which of the following is the

Section 1.1 – Nets and Drawings for Visualizing Geometry - . students will be able to : make nets and drawings of

Definition of Geometry - . the branch of mathematics concerned with properties of and relations between points, lines,

Geometry EOC Item Specifications - . the geometry eoc is computer-based. sample item 1. which of the following is the

Chapter 7: Vectors and the Geometry of Space - . section 7.1 vectors in the plane. written by dr. julia arnold associate

Why Do We Use Coordinate Geometry? - . euclid’s elements (about 300 b.c.). http://www.claymath.org/euclid/. euclidean