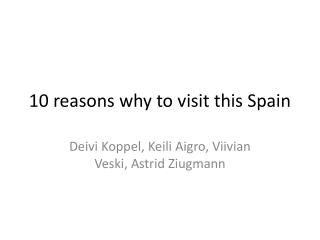 10 reasons why to visit this Spain. Deivi Koppel, Keili Aigro, Viivian Veski, Astrid Ziugmann. 1. Spain enjoys of an enticing weather with a lot of sun.... all year long!. 10 Reasons to Visit Charleston this Summer - The beaches of charleston attractions are famous on a summer day, which you

6 Reasons to Visit Spain in 2019 - Here are some of the reasons why you need to visit this european beauty in 2019.so, if

10 Reasons To Visit Tobago - The true caribbean, tobago offers travelers a unique experience like no other. explore our

VISIT TO SPAIN - . avoid project. arrival. it all started with the arrival of all participant s of the project . all of

Trip To Vietnam: Reasons Why You Must Visit This Magnificent Country - Maybe your family or friends are telling you to

10 Reasons You Should Visit San Francisco This Summer - Every part of california is amazing, but thereâ€™s truly

Reasons to Why You Should Visit Jacksonville - Do you love being close to water? if “yes”, then jacksonville is just

Reasons Why You Need To Visit Singapore!!! - Figuring out which places to visit in singapore can be tough. we give you a

10 Reasons to Fall in Love With Spain - So take a short break from your hectic life and explore spain, contact true blue

Six Reasons Why To Visit An Emergency Dentist - City dental care has a top dentist and oral surgeon in wakad, pune

Reasons To Visit Sikkim - If you are a nature lover then you donu2019t need any reasons to visit sikkim. there are still