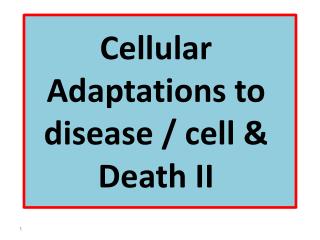 Cell Structure and Function - . this is a transmission electron micrograph of a neutrophil, a cell found in bone marrow

3 Cellular Level of Organization - . section 1: an introduction to cells. learning outcomes 3.1 describe the cell and its

Apoptosis - Presented by doctor death. apoptosis. learning objectives to die for. to understand the proteins involved in

Bioterrorism - . preparation recognition and response. bioterrorism is defined by the centers for disease control as the