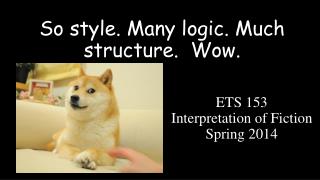 So style. Many logic. Much structure. Wow. ETS 153 Interpretation of Fiction Spring 2014. Elements of Style. Inert Verbs: “To be,” or not “to be”. Vague, simplistic, or overused verbs neutralize the vitality of sentences. So Much Change, So Many Opportunities - . medical education in a changing general practice. change. now ngms out-of-hours

Much or many? - . can you count these things?. boat. water. sand. flower. grape. sugar. do they make sensible plurals?.

Many or much ? - . that’s the dilemma. carlo munoz &amp; ilya f aynleyb. have you ever asked yourself?. if you have

So much alike! - . what is personal branding?. make a clear, specific, and consistent image of yourself on the internet

So Much Data - . www.sims.berkeley.edu/research/projects/how-much-info 1-2 exabytes per year; 250mb/yr per person on

So many questions - The billing. part 1: the changing landscape of skills and tools needed to be innovative in today's

So Many Questions? - . who knows the answers?. so many questions?. for credit answers must be complete. who is going to

So Many Questions... - "so many questions..." slides of my presentation at ii gsm gamification spain meetup

So Many Wheels… - . objective: students will solve problems using mathematical reasoning, and explain their reasoning

Too much, too many - . the warehouse madrid eso class. do you know these words ?. when do you feel like this?. what’s