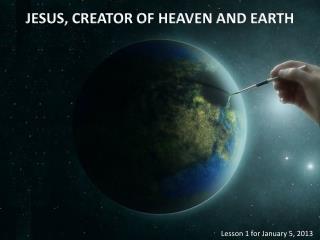 JESUS, CREATOR OF HEAVEN AND EARTH JESUS, CREATOR OF HEAVEN AND EARTH. Lesson 1 for January 5, 2013 . THE TESTIMONY OF CREATION. “ The heavens declare the glory of God; and the firmament shows His handiwork ” ( Psalm 19:1).

JESUS, CREATOR OF HEAVEN AND EARTH

Heaven with God - . god wants you. god is not only interested in listening to your prayers and answering them, he wants

THE MYSTERY OF THE KEYS TO THE KOG - . matthew 16:19. i will give you the keys of the kingdom of heaven; whatever you

Joy to the world The Lord is come! Let earth receive her King - . let every heart prepare him room. and heaven

Just Give Me Jesus - . the jesus i don’t believe in luke 9:18-20. successful jesus. jesus is the key to successful

Longing for Heaven - . philippians 3:19-20 (niv) – their destiny is destruction, their god is their stomach, and their

On Earth As It Is In Heaven - . the kingdom of god. 23 and jesus went about all galilee, teaching in their synagogues,

What is Christianity? - What do christians believe?. what is christianity?. do not copy this – atheist view of

I believe in God, the Father almighty, - . creator of heaven and earth. i believe in jesus christ, god’s only son, our

Doing Greater Works than Jesus - . studies in john’s gospel john 14. jesus foretold the kingdom. truly, i say to you,

When We All Get To Heaven - . sing the wondrous love of jesus, sing his mercy and his grace; in the mansions bright and