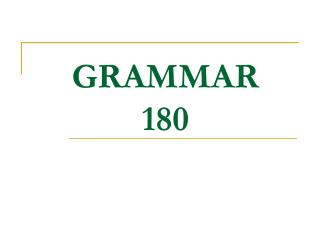 GRAMMAR 180. The boy received a watch on the occasion of his gratuation from college . Which of the underlined words in the sentence above is misspelled? A. Received B. Occasion C. Gratuation D. College. GRAMMAR 180 - . i gave the book to my sister who read it in a week. which change is needed to correct this sentence? a.

180 - Here is a description of anna after she went on vacation to a summer resort. anna has blue eyes. anna’s lips are

180 - A stable carbon atom has the following parts: – 6 protons – 6 neutrons – 6 electrons describe the location of

180 - Volume. right click to stop the animation. volume decrease. there you can chose full screen and then keep pressing

180 - A stable carbon atom has the following parts: – 6 protons – 6 neutrons – 6 electrons describe the location of

180 - A cactus has many adaptations in order to survive in its desert environment. – identify two adaptations of a