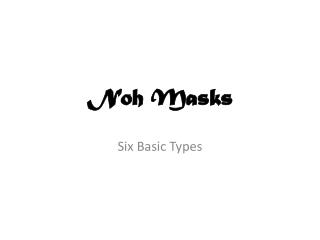 Noh Masks. Six Basic Types. Okina Masks. This type is only used for the piece called " Okina ", performed in the New Year or for special occasions. Hakushiki-jō.

Japenese Theater and Music - . jill hodder. noh and kabuki. there are two primary types of japanese music for theater:

Indian Chhau Dance Masks Japanese Noh Masks Masks from Papua New Guinea - . there are many festivals in india and often

Role of the Mask In different cultures - . japan. in japan, noh masks are used for theatre and dance performances. japan.

MASKS - . what is a mask ?. masks are all around you. each day masks are used in ways that provide the wearer with

The History of Masks - . greek masks. greek masks of dionysus and of pan. roman masks . masks have been used for

Traditions Transfigured : - . the noh masks of bidou yamaguchi. &quot;for me, &quot;mask-making&quot; is not

Costumes of Noh - . barbara hernandez. surihaku. to the left are two classic surihaku embroidered with flowers and

African Masks - . greetings from the gambia. how are you all? do you recognise us?. we are at the museum of african