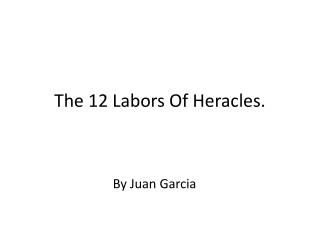 Heracles and Dionysus - Heracles or hercules?. heracles is the greek version of his name.the romans called him hercules,

Heracles a.k.a. Hercules - Heracles. what's in a name?alcides (descendant of alceus") called heracles by

HERCULES AND HIS 12 LABORS - Salvete, discipuli et discipulae. i know that you watched the movie already, but the movie

The 12 Days of Christmas - . on the first day of christmas my true love gave to me . a partridge in a pear tree. 2 turtle

Labor Legislation , the Mode of labor Organization and the Way of Improving the Situation of labors Review, Compar

The 12 Labors of Hercules - . hercules. son of zeus hera made hercules insane because she was jealous of him he killed

The 12 Days of Fitness - . a get-you-moving energizer from the power play! pa supplement. on the first day of fitness, my

The Labors of Hercules

Heracles - The son of zeus. heracles. heracles’s parents are zeus and alcmene. zeus had an affair and now his wife,

The Labors of Hercules - . baby hercules:. hercules, the latin equivalent of heracles, was the son of zeus and alcmene .

The Labors of Hercules - . marshlatin.wordpress.com. the problem. the goddess hera, determined to make trouble for

Heracles - . the story of the most glorious hero in the ancient

Heracles’ wife : Is this the only story that can be told? - . emma stafford (department of classics, university of

Heracles - . heracles: birth of a hero. parents are zeus and alcmene birth was delayed by eileithyia at hera’s demand