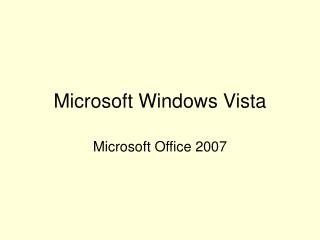 Office 2007 and Vista - . it isn’t just software!. presented by eileen campbell. planning an upgrade to office 2007 and

Microsoft Windows Vista - . your next operating system? by stuart pierce. what is vista?. new o/s for pc workstations and

Vista-20P Series WebCast - . introduction. this course will cover programming and features on the vista-20p throughout,