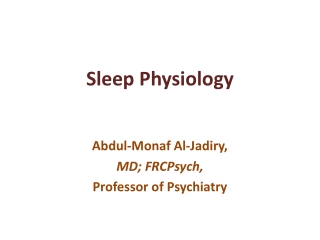 Physician Sleep Deprivation: To Sleep or Not to Sleep? - . don hayes, jr., md university of kentucky college of medicine.

SLEEP AND DREAMS - . made by raminta mockut ė psbns1-03. content. why do w e sleep and need for sleep the stages of

Stages of Sleep and Sleep Disorders - . what is the nature of sleep?. most people think of sleep as a state of

Best Over The Counter Sleep Aids - The best sleep aid can help you have better sleep. but when you buy the sleep aid