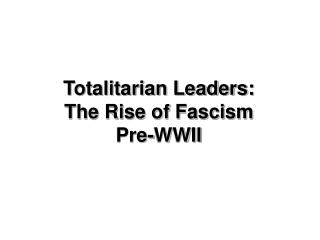 Life in a Totalitarian State - . totalitarianism after wwi another positive learning experience at camp haskell!.

Rise of Fascism - . eq: why did fascism rise in europe?. what is fascism?. according to webster’s

Chapter 31, Section 3: Fascism Rises in Europe - . in response to political turmoil and economic crises, italy and

Major Causes of WWII - . treaty of versailles rise of italian fascism rise of hitler and the nazi party great depression

Rise of Totalitarian Dictators Essential Question : - Who were the major totalitarian leaders in the 1920s &amp;

Fascism on the Rise: Italy - . objective 1: describe how conditions in italy favored the rise of mussolini objective 2:

Fascism on the Rise Italy - . objective 1: describe how conditions in italy favored the rise of mussolini objective 2:

Case Study in the Rise of Fascism: Mussolini - . overview. the disintegration of order in italian society made possible

Fascism and the Totalitarian State

FASCISM - . an overview. definition. an ultra-nationalist, totalitarian ideology opposed to democracy, liberalism and