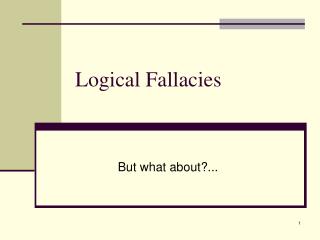 Chapter 4: Control Structures I (Selection) - . objectives. in this chapter, you will: learn about control structures

Plain language and the web – How to make your content clear, logical, and accessible - . presented by

Logical Fallacies - . don’t ruin your argument with them . …here are 18 (of many). logical argument structure.