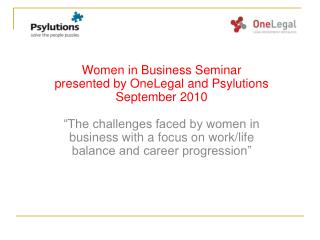 Women in Business Seminar presented by OneLegal and Psylutions September 2010 “The challenges faced by women in business with a focus on work/life balance and career progression”. How far have we come? 1902 - women given the right to vote and to sit in parliament (1895- SA).

Cardiovascular Disease in Women Module I: Epidemiology - . module i: epidemiology . statistics on women and

Chapter 11 Women’s rights in the administration of justice - . facilitator’s guide. learning objectives. to make the

The Role of Women in Community Development: Challenges and Opportunities - . by dr. paulette meikle. community