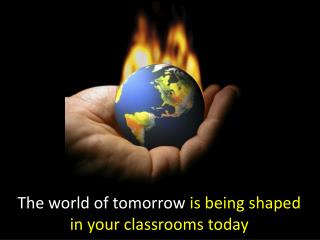 The world of tomorrow is being shaped in your classrooms today The world of tomorrow is being shaped in your classrooms today. Melbourne Declaration on Educational Goals for Young Australians (MCEETYA 2008). Major changes in the world: rapid global integration and international mobility

The world of tomorrow is being shaped in your classrooms today

Recommending a Benefits Strategy - . for today and tomorrow. what is your health care cost containment strategy?. for

Meeting the Needs of English Language Learners in Reading First Classrooms - . today’s goals. examine the nature of the

我事奉永活救主 I serve a risen Savior, 祂今在世活着 He's in the world today; 我知道祂确活着 - I know

Day 2 – Age of Anxiety - . entrance task : think: in what ways does art, literature and/or music reflect our world

Preparing Students for the Challenges of Tomorrow: We Can’t Do It Without You! - . what we ’ ll cover…. the world

J-Shaped Distributions - . robert m. hayes 2004. overview. viewing distributions of use descriptive rather than

Global Perspective A Single Stick of Doublemint Today – 18 Billion Tomorrow - . a product must be made accessible to

Smart Classroom Equipment - . instructions for use. contents. which classrooms are smart classrooms ? what equipment does