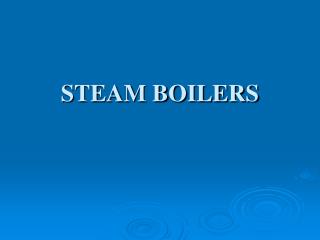 STEAM BOILERS. Definition. A closed vessel in which steam is produced from water by combustion of fuel. Purpose of boilers. For generating power in steam engines or steam turbines In textile industries for sizing and bleaching Boilers - . presented by: lisa chang. objective: to describe and explain the boilers’ functions and the two main types

Boilers - . steam boilers. definition of a boiler boiler is defined as a closed metallic vessel in which the water is

combi boilers - Www.combiboiler.co.uk is a leading website that is dedicated to combi boiler. it reviews the latest

Steam Boilers and There Application By: Matt Hunt Date: November 2, 2005 - . objective: to inform on the basic functions

STEAM - Roller coasters. steam. roller coasters are among the biggest attractions at amusement parks throughout the