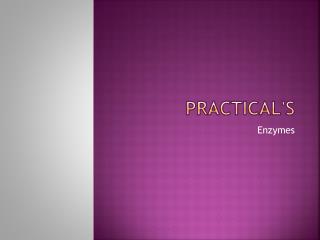 State Board Practical Exam - . the entire exam will be 3 hours and 20 minutes total number of points is 142 the passing

PRACTICAL TEST STANDARDS - . how do i assure that my practical test standards are up to date?. access the internet

The Roman Road A Practical Introduction to The Book of Romans  - . “since god did not spare even his own son but gave

Practical-7 Mayer’s Hematoxylin &amp; Eosin - . by: khadija rashed. it is a general purpose stain or

”There is nothing so practical as a good theory” - . management research in the improvement of health services mats

Unclog Your Happiness; A Practical Guide to Living Blissfull - Ever-searching, never finding, we continue a never-ending