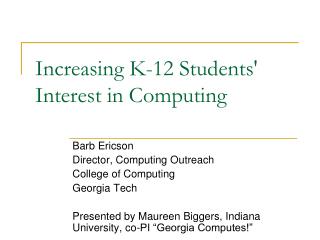 The Learning Self: Effective Use of Technology in Learning Environments - . haruna tada. overview. goals for the use of

Career Exploration - 0. career exploration. how can i choose a career that interests me?. 0. this unit: career

After School Programs for Green Dot Public Schools - . why we needed them, what they needed to look like, and how they

What is Happening in the World of Gifted Education? - . professor karen b. rogers gifted education research, resource

Explicit Vocabulary Instruction - . for all teachers. why explicit instruction?. teaching vocabulary has been shown to

The Power of an Integrated Curriculum through TBLT - . jalt 2011 in tokyo nagoya university of foreign studies department

Event Supervisor and Event Assistant Training Session 2013 - . if you haven’t signed in as a volunteer, please go to:.

What is Computing? - . computing. any goal-oriented activity requiring, benefiting from or creating computers computer: a

Internationalisation of the Curriculum Roger Woods - . british council survey of employers warning that “students in

Why Should I Care Who’s an Engineer? The Need for Women in Engineering - . cathy pieronek swe title ix lead 4 may 2013.

Year 2 Computing Specialism - Sen &amp; computing. aims of the session for students to develop an understanding of: