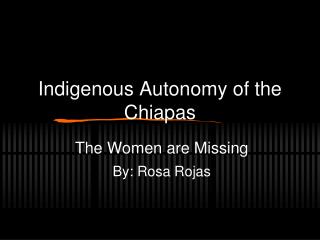 Indigenous Autonomy of the Chiapas

Indigenous Autonomy of the Chiapas. The Women are Missing By: Rosa Rojas. The Missing.

Indigenous Autonomy of the Chiapas

By Rosa Rojas Presented by Rebecca Hendrickson - Indigenous autonomy in chiapas: the women are missing. by rosa rojas

Geopolitics of Armed Conflicts - . what is geopolitics of armed conflicts?. two or more armed factions seeking to gain

By Joanna Swanger Presented by Shauna Wimmer - Casa amiga: feminist community-building in ciudad juárez as an

Mexico - . by gabrielle lashley. mexico. all about mexico. mexico is a federal constitutional republic in north america.

coneval .gob.mx - A methodology for the measurement of multidimensional poverty in mexico. august, 2010. www. coneval

Philosophical Chairs - . “ living in this gentrification environment is much more difficult for residents. actually