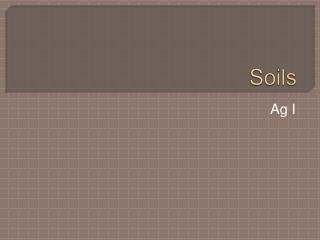 Soils. Ag I . Objectives*. Outline the process involved in soil formation Describe a mature soil profile Discuss the 8 land capability classes. Soil. The top layer of the Earth’s surface which is suitable for the growth of plant life. Soil Formation. Slow

Soil - . introduction. soils are a fertile, natural resource. soils develop / form from the weathering of rocks in one

Soils NR 200 - . unit 1. the soils around us. what is soil?. dictionary – the unconsolidated material that occupies the

An Introduction to Soils and Soil Terminology - . soil: some definitions. soil can be defined as the solid material on

Soils - . plant material maintenance. soil. soil is the top layer of the earth’s crust . millions of years to make

SOILS - . what is soil??. soils are the transition between the biotic and abiotic worlds. soil is a mixture of: minerals

Soils - . soils. soil is the loose covering of broken rock particles and decaying organic matter soil is the end result

Specific Gravity of Soils - . specific gravity. this number indicates how much heavier/lighter a material is than water.