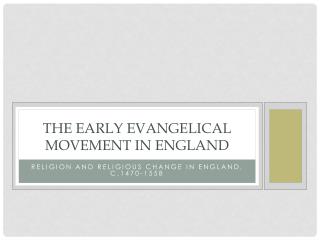 The Early Evangelical Movement in England The Early Evangelical Movement in England

Let’s Learn About England - Artonthemove. let’s learn about england. where is england?. map of england. a few facts

THE SECOND GREAT AWAKENING - . what was it?. a new religious revival characterized by emotional camp meetings an

The 2 nd Great Awakening - . when did christianity establish itself as america’s main religion?. in 1801, a religious

The Politics of Protest - . the student movement and the counterculture. the growth of the youth movement . the roots of

Early English Colonies - . roanoke jamestown. spain and england are rivals. spain had taken control of much of the new

Early British Non-Violence and the Chartist movement - . the english tradition, from godwin to lovett and the ‘moral

The political concerns of Evangelical Christians in the UK - . greg smith william temple foundation, and evangelical

Let’s Learn About England - . www.flags.net/engl.htm. where is england?. map of england. www.europe-map.org/