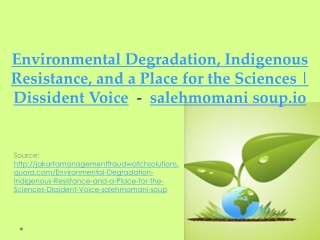 For roughly five hundred years, Indigenous peoples have been struggling against the dominant institutions of society, against imperialism, colonialism, exploitation, impoverishment, segregation, racism, and genocide. The struggle continues today under the present world social order and against the dominant institutions of ‘neoliberalism’ and globalization: the state, corporations, financial institutions and international organizations. Indigenous communities continue to struggle to preserve their cultural identities, languages, histories, and the continuing theft and exploitation of their land. Indigenous resistance against environmental degradation and resource extraction represents the most direct source of resistance against a global environmental crisis which threatens to lead the species to extinction. It is here that many in the scientific community have also taken up the cause of resistance against the destruction of the global environment. While Indigenous and scientific activism share similar objectives in relation to environmental issues, there is a serious lack of convergence between the two groups in terms of sharing knowledge, organizing, and activism.

What is Environmental Degradation ? - Nature and its magic sounds endangered species and the degradation of the

Environmental Science: Toward a Sustainable Future Richard T. Wright - . chapter 4. ecosystems: how they change ppt by

Conquest of the Native Americans - . what were some of the major events of the indian wars post civil war?. main ideas of

Lesson 19.2: The Indian Wars - . today’s essential question: how did conflict between native americans and the united