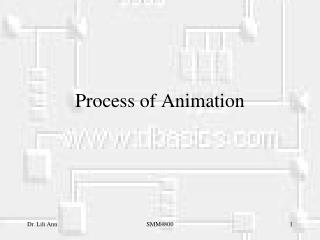 The Architectural Process of 3D Walkthrough Animation - The world of animation has come a long way since its inception.

Process of Cel Animation: How does it Works - Cel animation is a lengthy, costly process that requires the study of a

History of Animation - . a forerunner of today's comic strip can be found in an egyptian wall decoration circa 2000 b.c.

Types of animation - In conventional animation, illustrators draw pictures on a straightforward bit of paper fitted on a

Animation of Fluids - . animating fluid is hard…. too complex to animate by hand surface is changing very quickly

Beginnings of Animation - . animate : to bring to life. the rapid display of a sequence of images of 2-d or 3-d artwork

Animation of Algorithm - . goal: to understand an algorithm by animating its execution, step-by-step. algorithm:

Animation of Fluids - . animating fluid is hard…. too complex to animate by hand surface is changing very quickly lots