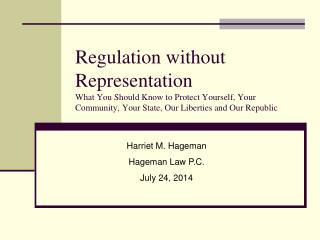 Regulation without Representation What You Should Know to Protect Yourself, Your Community, Your State, Our Liberties and Our Republic. Harriet M. Hageman Hageman Law P.C. July 24, 2014. Current Financial Climate. Federal Government Debt - $ 17.599 Trillion (7/23/14) From Harriet Tubman: Conductor on the Underground Railroad

Big Data at the Intersection of Clouds and HPC  - . the 2014 international conference on high performance computing