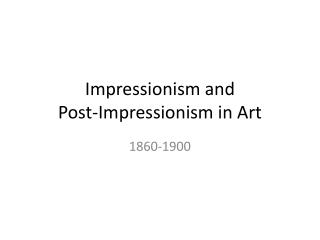 Impressionism and Post-Impressionism in Art. 1860-1900. Influences/Characteristics. As people grew desensitized to the emotional expression of Romanticism, the need for a new perspective emerged Impressionism aimed to evoke an image or suggest an emotion-subtly Impressionism and Symbolism, Primitivism - . in the modernist movement, there were many parallels between music and other

Impressionism - . impressionism was a 19th century art movement that began as a loose association of paris based artists,

Post-Impressionism - . post-impressionism is the term coined by the british artist and art critic roger fry in 1910 to