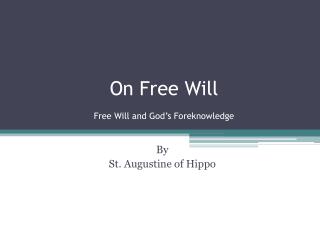 On Free Will Free Will and God’s Foreknowledge. By St. Augustine of Hippo. Problem: Gods foreknowledge and Human Free will. Call Operators Are Standing By!! - . call and … ask for a copy of this presentation. in print or by pc data disc. ask

Free Speech: Obscenity and Regulation of Indecent Speech Chapter 7, Part 1 – CS 340 - . think about: how are current