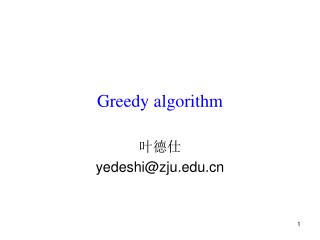 Greedy algorithm. 叶德仕 yedeshi@zju.edu.cn. Greedy algorithm’s paradigm. Algorithm is greedy if it builds up a solution in small steps it chooses a decision at each step myopically to optimize some underlying criterion Analyzing optimal greedy algorithms by showing that: Greedy Algorithm - . nattee niparnan. greedy. if solving problem is a series of steps simply pick the one that

Greedy Algorithm - . a greedy algorithm always makes the choice that looks best at the moment key point: greed makes a

The “ Greedy Snake ” Algorithm - . nick govier david newman. overview. what is “greedy snake”? how does it work?

Carousel Greedy: A Generalized Greedy Algorithm for Optimizing the Cardinality of a Set - . carmine cerrone , raffaele

greedy - . thrill. repulsive. slightest. does she have a huge smile? which one of your vocabulary words is the opposite