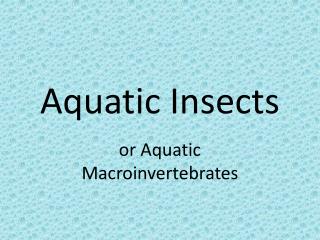 Aquatic Biodiversity - . chapter 8. 8-1 what is the general nature of aquatic systems?. concept 8-1a saltwater and

Aquatic Ecology - . how much water is there on earth?. habitats and communities. marine systems: three major zones off

It's A Good Thing There Are Insects - . sometimes we call them bugs. but their real name is insects. all insects have six

Spiders and Insects - . a lesson for kindergarten. spiders . spiders have two body parts, the head and the abdomen .

Aquatic Insects - . 8 april 2009. aquatic insects. insecta (even hexapoda) are plesiomorphically terrestrial . but there

Butterfly - . sean and caroline. about insects. the insects are the largest group of animals in the world. insects

Insects in the School Garden - . what is an insect? . insects are invertebrates (they do not have a backbone or internal

Insects: Dressed for Success - . mtfrazier. s.camazine. mtfrazier. insects are the smorgasbord of the animal world!. who