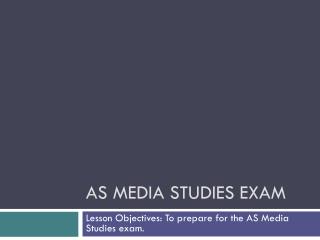 AS Media studies exam. Lesson Objectives: To prepare for the AS Media Studies exam. Format of the Exam. Exam Format. The exam is 2 hours long. There are two sections to the exam: Section A: TV Drama Section B: Institutions and Audiences AS media studies - . magazine evaluation. i have created a music magazine called “bars” aimed at fans of rnb and

AS MEDIA STUDIES - . as explore the concept of television drama. students to mind-map what they understand by television

AS MEDIA STUDIES - . unit:g321. foundation portfolio. in what ways does you media product use, develop or challenge forms

AS GCE MEDIA STUDIES - . aims and objectives understand how and why editing techniques vary capture footage onto

AS Media Studies Coursework - . evaluation charley davitt. in what ways does your medua product use, develop or challenge

AS GCE MEDIA STUDIES - . aims and objectives understand how and why editing techniques vary capture footage onto final

AS Media Studies; Narrative Theory - . one upon a time…. story? narrative? plot?. what is narrative ? while the term

AS Media Studies: Mise-en-scene - . we are learning to: understand the concept of ‘mise en scene’ apply the concept

Media Studies - Racism in the media. media studies. how does the media portray race?. the coon the tom the piccaninny the