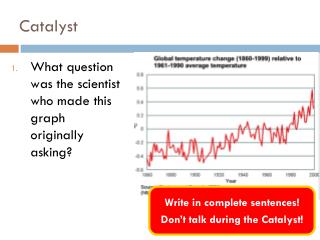 Catalyst - . 1. explain why sulfur has a bigger atomic radius than oxygen by drawing both bohr electron diagrams. end.

Catalyst - . recently, there was a large oil spill in the gulf. what were some impacts of the oil spill on the ecosystem?

Catalyst - . provide one example of how a pollutant could affect life on land and in water what happens to the amount of

Catalyst - . put safety quiz, safety contract, and donorschoose form (if applicable) in front of you. i will check them

Catalyst - . fire write (3 minutes): do you think the phrase “ smelt-it-dealt-it ” has a scientific basis? why or why

Catalyst - . 1. write the order of the orbitals until you get to 5p. (start with 1s, etc.) 2. what orbital is phosphorus

Catalyst - . set up your c ornell notes by: putting the heading (metrics) at the top left gluing the notes on the right

Catalysis and Catalytic Reactors - . 授課教師：林佳璋. catalysis. definitions. ~a catalyst is a substance that

Catalyst - . put this catalyst on the same sheet of paper you used yesterday. check your week 15 notes if you don’t

Catalyst - . given the following equations and h o values, determine the heat of reaction (kj) at 298 k for the reaction:

Catalyst - . diet coke and mentos. justify – tps. why do smooth coated mentos have a much slower reaction than rough

Catalyst - . 1. you have a broken piece of glass, what do you do with it? 2. before you begin any lab, what do you need

What Is a Catalyst? And Why? - . an agent that changes (either increasing or decreasing) the rate of a chemical reaction.

Catalyst - . notebooks today ! you are trying to build a treehouse and you have a few tools to get the job done. for each