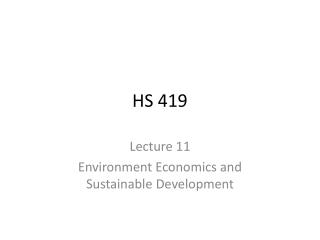 HS 419. Lecture 11 Environment Economics and Sustainable Development. Recap. Firstly resources are assumed, in principle, to be substitutable without restrictions. CPEG 419 - . introduction to data networking. review of lecture 1 and continuation of chapter 1. announcements.

Personality 419-425 - . a person’s pattern of thinking, feeling and acting. psychoanalytic perspective. of personality.