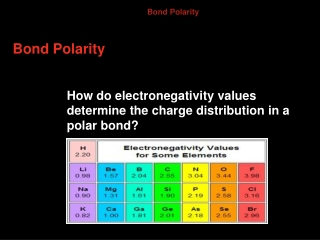 Polarity of Molecules - . revision predicting polarity effects of polarity. revision. polarity is the simplified name we

Functional Groups, Orbitals, and Geometry - . resonance structures. bond polarity - part i. a bond is polar when the

Section 5.4—Polarity of Molecules - . electronegativity. the pull an atom has for the electrons it shares with another

Polarity - . how does electronegativity affect the polarity of a covalent bond? how does the shape of a molecule affect

Electronegativity and Polarity - . chem 332 – o’dette. how do you determine the polarity of a molecule?. based on

Assignment #33 - . polarity &amp; naming covalent compounds. there can be unequal sharing of electrons in a bond.

Polarity - . y12 chemistry. polarity. having poles opposite ends in molecules its respect to charge covalent bonds can be

Warm-Up 1/14/14 - As a table, come up with the big idea from yesterday’s computer activity. use the ideas of electron

Bond polarity and Electronegativity 8.4 - . by: alec staviski and sarah maxwell. bond polarity. the sharing of electron