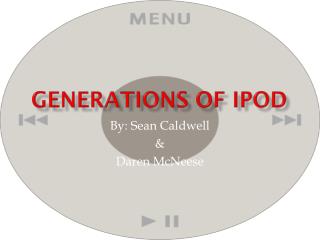 Generations of Ipod. By: Sean Caldwell & Daren McNeese. Classic IPod . The iPod was created by the apple company, and started out as a regular mp3 player. With the first generation made in 2001. It could hold at least 1000 songs on its 1.8” hard drive.