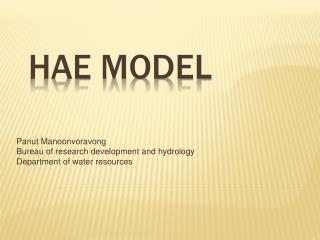 Panut Manoonvoravong Bureau of research development and hydrology Department of water resources. HAE Model. This model was funded by World Bank in May 2009 for the Lower Mekong Basin (LMB) to assist the Thai Government to develop policy tools for