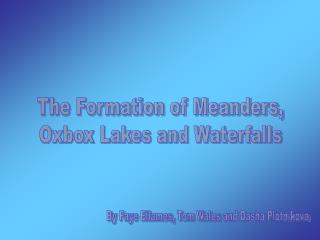 The Formation of Meanders, Oxbox Lakes and Waterfalls The Formation of Meanders, Oxbox Lakes and Waterfalls

Key terms - . let’s see what we have managed to cover this half term. checklists . learning objectives. to understand

Standard Enthalpies of Formation - . the standard enthalpy of formation of a substance, denoted d h f o , is the enthalpy

How is a waterfall formed? - . you will need. your book a template a stick of glue scissors pencil crayons- blue and

Oxbow Lakes - . by cara. what is an oxbow lake?. an oxbow lake is a crescent s haped lake lying beside the middle course

Middle course of the river - . quick revision for spot test. what is erosion? i am a type of erosion that is like