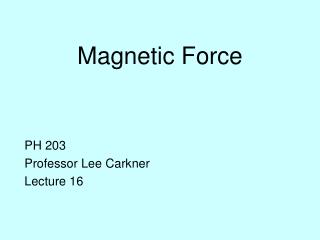 Magnetic Force. PH 203 Professor Lee Carkner Lecture 16. Charge Carriers. Imaging a current flowing from top to bottom in a wire, with a magnetic field pointing “in” If the charge carriers are negative (moving to the top), the magnetic field will also deflect them to the right. MAGNETIC REFRIGERATION - . introduction. magnetic refrigeration is a cooling technology based on the magneto caloric

Intermolecular Force - . enzymes. before knowing more about enzymes, we should have some basic concepts on intermolecular

Chapter 21 Electromagnetic Induction Faraday’s Law ac Circuits - . we found in chapter 20 that an electric current can