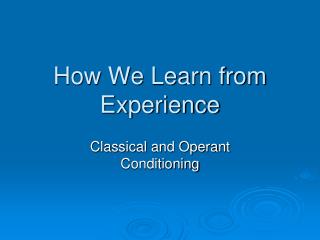 Chapter 4 - . supporting processors and upgrading memory. objectives. learn about the characteristics and purposes of

Essay Two - . in this essay you’ll . practice the basic essay structure you learned in essay one; learn how to write

What I should have been told as a freshman - Prepared for new dean’s scholars – september 2, 2010 by alan kaylor

Learn Driving Fast - We offer best driving courses in calgary, an expert driving school with 25 years of experience in

Chapter 3 - . all about motherboards. objectives. learn about the different types and features of motherboards learn how

Stacks - . chapter 8. objectives. in this chapter, you will: learn about stacks examine various stack operations learn

Recursion in Java - . recursion : recursion is the process of defining something in terms of itself. leonardo da vinci