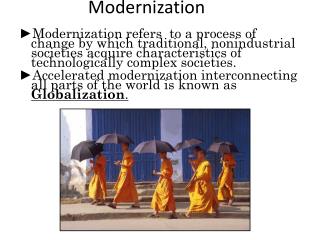 Modernization. Modernization refers to a process of change by which traditional, nonindustrial societies acquire characteristics of technologically complex societies. Accelerated modernization interconnecting all parts of the world is known as Globalization. MODERNIZATION SUBPROCESSES. Economies of T RACTION D IESEL V S E LECTRIC - How competitive are the diesels ? is there a need for further

TOWN HALL - . presented by the office of public school construction &amp; the division of the state architect.

China’s Drive for Modernization - Chapter 29:iii - - . at the end of the nineteenth-century, european nations were in

Jeanne Scott Matthews talking-head-in-chief - Healthcare changes and how they impact you and your business. obamacare:

Epidemiologic Transition: Changes of fertility and mortality with modernization - . abdel omran the epidemiologic